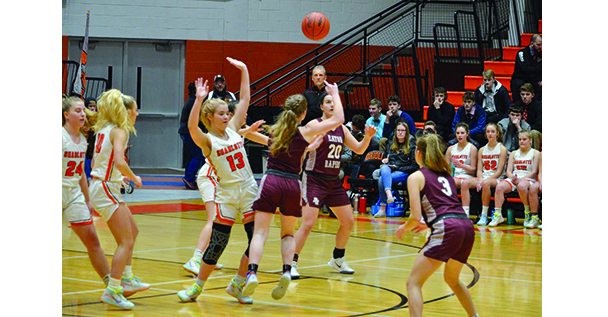 The Eaton Rapids Lady Greyhounds traveled to Charlotte Jan. 10 to take on their rivals. Following their first loss of the season Jan. 7, the Greyhounds were determined to show the Lansing area they are a team to watch this season.

In the first quarter, the Greyhounds used their energy to jump all over the Orioles, using a fast tempo to jump out to a 17-4 lead. During the second quarter, a couple of 3-pointers kept the Orioles from falling too far behind and forcing more of the high tempo ball the Greyhounds had gotten away from. After some back and forth, Eaton Rapids found themselves heading to the locker room with a 32-19 half-time lead.

In the third quarter, Eaton Rapids once again attacked the Orioles with a burst of energy, scoring a quick 6 points and extending their lead slightly before going into a comfort mode. Heading into the fourth, the Greyhounds led 47-32. With the game seemingly in hand, bench players for the visitors got a few extra minutes, including Eaton Rapids’ exchange student Charli Sharam. Charli has been an inspiration for the team this season, and with 2 minutes to go in the game, was able to sub in and get a shot at making her first-ever basket in a real game. A minute later, off a pass from Kyra Acker, Charli turned and fired a bank shot that rattled home, sending the visiting Greyhound student section into a frenzy. It was definitely a moment in time that will always be remembered.

Three Greyhounds scored in double figures, with Peyton Benjamin leading the way for the Greyhounds in a big way, scoring 23 points to go along with 9 steals, 6 rebounds, and 4 assists. Adi Sysum also put in 16 points with her 7 rebounds. Emily Cline added 10 points, Serenity Horton had 6, Shelby Warner had 4, Charli Sharam had her 2 points and Loralei Berry added 1.

This was a big win for Eaton Rapids, beating the rival Orioles on their home court with a final score of 62-45.

The Lady Greyhounds went on to win their Jan. 14 non-conference game — beating Fowlerville 58-40.