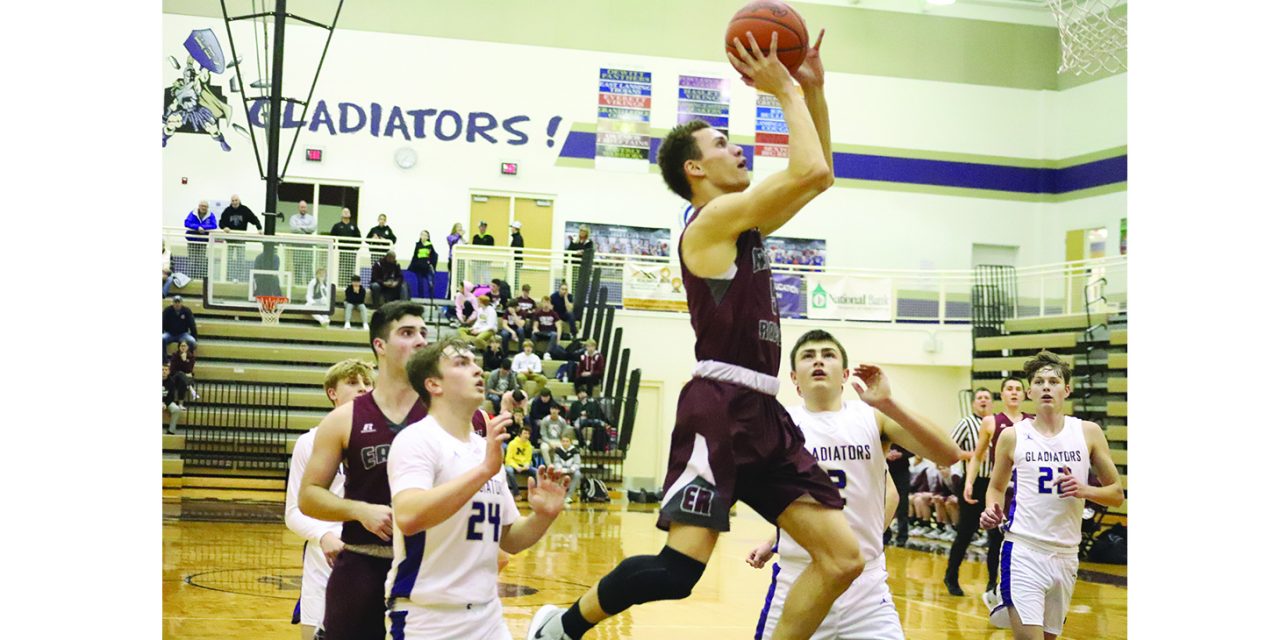 Eaton Rapids varsity basketball coach Mark McDaniel had a good feeling his team would be in the position they’re in approaching the halfway point of the regular season.

“We were definitely planning on having a good year,” said McDaniel. “It started in the spring of last year, hitting the weight room and playing summer ball. They all worked hard.”

The Greyhounds went 12-9 in the 2017 MHSAA season and 19-3 in summer showcases. Those results are being reflected in a strong start by Eaton Rapids, who is trying to accomplish something never achieved in school history.

“We want to win a league title because that would be the first one in school history,” said McDaniel. “We are trying for that.”

Eaton Rapids will have its work cut out for them to do so in a strong CAAC White Division.

The Greyhounds (7-1-) sit in second place in the conference as of Jan. 15, The sole blemish on their record thus far was a missed opportunity in their quest for a conference title, but they’ll get a rematch.

Eaton Rapids lost to the league-leading Cougars of Catholic Central just before Christmas break in a game the Greyhounds let slip.

“We were up 12 in the fourth quarter, that one got away,” said senior forward Bronson Sysum. “We’ve got to get it back at their place.”

That chance won’t come until Feb. 7, but Eaton Rapids has its work cut out every time they take the floor until then.

Ionia joins Lansing Catholic among the unbeaten in conference leaders. Sexton, Portland, Fowlerville and Charlotte are certainly not gimme wins. But the Greyhounds are capitalizing on their versatility to succeed so far.

Eaton Rapids certainly has the size to control the paint with the 6-foot-7 Sysum at the helm; he’s averaging 15-points and 7-rebounds per game. Joining Sysum amongst the group of big fellas is a relatively new big fella, Griffon Gleason. Gleason’s huge growth spurt now has him listed at 6-foot-5 inches tall and growing. It has resulted in a 14-point and 6-rebound per-game average.

“He’s done a great job in filling that role,” said Sysum. “He’s not scared on the floor, and he’s been attacking the basket aggressively.”

The Greyhounds are getting quality looks offensively, shooting just under 50-percent from the field overall and over 30-percent from behind the arc.

It’s that inside-outside versatility which has reaped benefits for the Greyhounds.

“We try to get up the floor as we can and get the best shot possible,” said McDaniel. “But we run a lot of sets and rely on our length and size down under the basket.”

Eaton Rapids has the ability to light it up from outside as evidenced by a recent 11-for-24 performance from the three-point line. But they also have the versatility to pack it in and get optimal shots. Such was the case in the Greyhounds’ early-season victory over Sexton. The Greyhounds shot just three three-point baskets total that entire game.

If Eaton Rapids can maintain this versatility, there is something which may provide a little motivation during this year’s off-season workouts — like a CAAC White championship banner, perhaps.

“We look up there every day, and there isn’t one,” said junior Mason Wichman, a versatile 6-foot guard averaging 10-points and 3-assists per game. “We want to see it there next year.”

Eaton Rapids’ RJ Van Vliet aims for the hoop in the Jan. 14 game against Fowlerville.