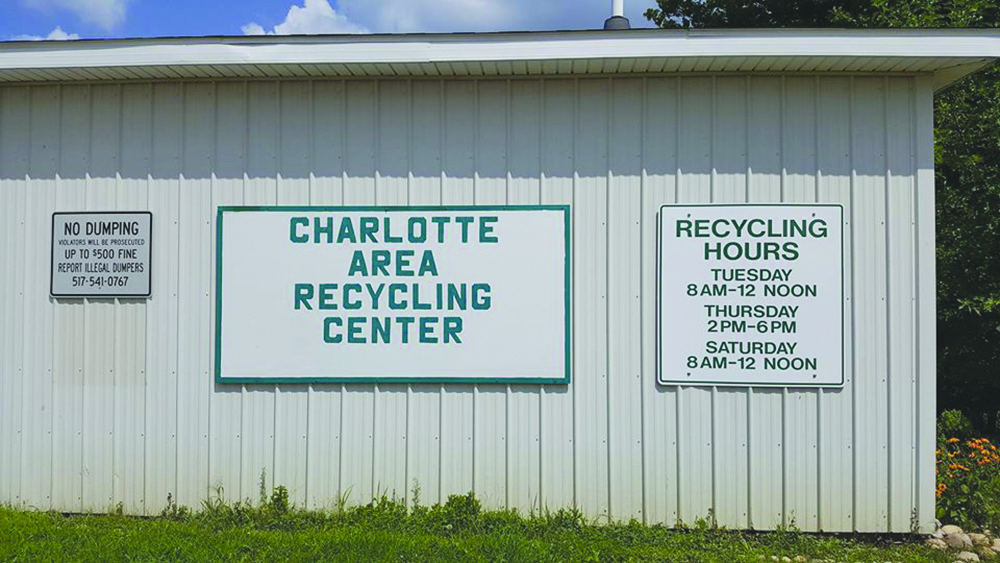 — As members of the Charlotte City Council go through their analysis of the proposed budget for the coming fiscal year, closure of the Charlotte Area Recycling Authority (CARA) is off the table as a possible way to reduce spending.

Charlotte City Manager Gregg Guetschow presented his budget recommendations for the fiscal year beginning July 1 to city council on April 1. His recommendations included closing CARA as a way to save money. But at the May 4 council meeting, after discussion of the issue, council expressed its desire to keep CARA open.

Quinn Underwood, who has served as CARA’s director for the past seven years, had posted a note on Facebook on April 27 about the recommendation for closure and her concerns.

“CARA is an absolute treasure … the closing of CARA would be a huge loss to our community,” stated Underwood in her post. “So I am asking for help to keep us open.”

She asked for area residents to write to city council members in support of the center staying open.

Many did, and Guetschow said council made it clear they wanted to keep it in the budget.

“Council did give direction, and the sentiment from the vast majority was that they were not interested in eliminating CARA funding from the budget,” Guetschow said. “I expect it will be funded in this year’s budget.”

Guetschow said his recommendation to close CARA was strictly for cost-saving reasons, as the coming year promises to be very challenging, finance-wise.

“This will be a very tight budget for us,” he said. “Due to the economic fallout from COVID-19, and all the uncertainty, it looks like it could be a really difficult year financially.

“We are looking for any place we can economize, and the recommendation to close CARA was definitely just a budgetary issue.”

CARA is funded by the city. While it does make a “profit” from the recyclables it collects, it has been operating at a loss for the past several years. Guetschow said the total yearly budget for the recycling center is approximately $70,000, but after factoring in how much CARA is expected to bring in this year, there will be a shortfall of $16,000.

The recycling center has been operating at a loss for two primary reasons — the biggest being the significant drop in the price they are able to get when selling the recycled materials and the other being an increase in labor costs.
“There has been a major softening of the market for recycled material, and that is not expected to improve anytime soon, especially with a potential slowdown in the economy over the next couple of years,” Guetschow said.

With the rise in the minimum wage, the other factor in CARA’s shortfalls is increased labor costs. Underwood said the center employs a part-time staff of six, which includes herself. Most are paid minimum wage and work from 10 to 20 hours a week.

Guetschow noted there was council support for looking at opportunities to raise additional funds to prevent continued CARA deficits. He pointed out that, while many people from the surrounding townships use the center on a regular basis, it is city taxpayers footing the bill.

“Users come from far and wide; it’s not just city residents using it,” he said. “But it is city residents’ tax dollars that are subsidizing it.”

Underwood, speaking on May 6, said she did not “attend” Monday’s council meeting, which was held via video access due to COVID-19 restrictions. But it was her understanding at least 40 people had expressed their support of CARA to council members.

“It was incredible,” Underwood said. “I am so amazed by the huge outpouring of support.

“I am so proud of our community and so proud of how they rallied together to keep CARA. It is such a vital service for the community.”

The recycling center, located at 201 Hall St. in Charlotte, is currently closed to recycling due to the current COVID-19 restrictions. It is expected to re-open May 15.