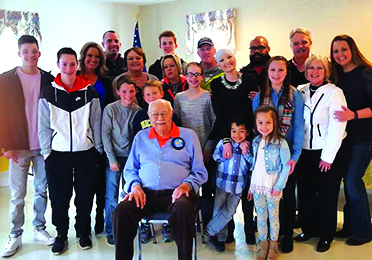 Like any good son, Richard Cooper still thinks of his mother often. Approaching his 90th birthday, Dick, as most people in Charlotte know him, has a lot of life on which to reflect, but it’s the lessons he learned at a young age that have stuck with him through all of those years.

“I think about the tough times we had growing up,” Dick said. “My mother worked so hard, I think that’s why she lived to almost 101.”

Dick, the son of Hugh and Almary Cooper, grew up on the family farm on Stine Road after spending the first three years of his life living in his grandparent’s chicken coop in Chester, Mich. He certainly came from humble origins, which may be why he can look back and appreciate where he came from and where he ended up.

He went from bathing in the same dirty water in the same metal tub shared by each of his four siblings to becoming a beloved owner of Smith’s Menswear in downtown Charlotte, complete with a loving wife and two successful children.

Through a strong work ethic and undeniable charisma, Dick has epitomized the American Dream.

He joined the United States Navy in 1944, narrowly missing an invasion of Japan near the end of WWII. But the stories he likes to share really start in the late 40s when he met the love of his life, Lila.

It was a chance encounter at the Ritz Restaurant, a local coffee shop near his job at Estes Ledley Funeral Home in Lansing. He noticed Lila from across the room and, being the charmer he is, slipped her a note on a napkin. It read, “Hello there gorgeous. You have to watch your figure you know. Call me.”

There was only one problem with his plan. The number he gave her was to Estes Ledley, as the owners had allowed him to live above the funeral home.

“She almost hung up,” Dick recalls of the first time Lila tried to reach him.

Fortunately for the two of them, she stayed on the line. The two hit it off completely, despite the fact that Lila spilled coffee on his brand new Botany 500 suit. The two were married on April 11, 1950 and enjoyed 63 years together before her passing in 2013. It was a match both knew from the beginning as evidenced by the fact that Dick still has that napkin nearly 69 years later.

Of course their marriage was not without its struggles. Dick convinced Lila to move back to Charlotte shortly after they married so Dick could work at The Toggery Shop, owned by Harold Smith. Dick had worked there in his youth before entering the Navy and relished the idea of returning home. After a chance meeting with Smith at a State Chamber of Commerce meeting, Dick agreed to return to the shop on the condition that he could buy into the business.

“I just got to thinking about it, and I wanted to come back to Charlotte,” he said.

Earning $65 a week, Dick would take his paycheck and give the money back to Smith, buying his way into the business. Dick and Lila were able to live off Lila’s $75 a week at Eaton County Bank.

“That’s the way it worked all of those years,” Dick said.

Working hard to build his business, he was able to grow what would eventually become Smith’s Menswear through his knack to connect with people. His family members will tell you that he loves to make people laugh, and is extremely caring and giving.

“I really enjoyed the interaction with my customers,” he said. “I got a lot of enjoyment out of making them happy. I met a lot of people and made a lot of friends.”

His work ethic was a trait his two children, Scott and Susan picked up on early in their lives.

“His dedication and commitment really impacted my and Scott’s lives,” Sue said. “He did work long, hard hours, sometimes seven days a week. But, he always seemed to make time for his family.”

He is still a dedicated family man, making time to catch all of his grandkids’ and great-grandkids’ events. The family returned the favor Saturday, March 25 with a surprise 90th birthday party.

“What a surprise,” he said. “I wish to thank Susan and Galen (Sue’s husband) and Scott and Penny (his wife) for the birthday party they had for me, also the girls that served the cake and ice cream. And, a big ‘thank you’ to all that attended and gave me cards to celebrate my 90th birthday. Thank you, thank you, thank you.”

If you would like to wish Dick a happy birthday (April 7), birthday wishes may be mailed to Richard Cooper, 628 Emerald Dr., Charlotte, MI 48813.

‘Celebrities’ take the stage Feb. 18 for inaugural Dancing with the Charlotte Stars 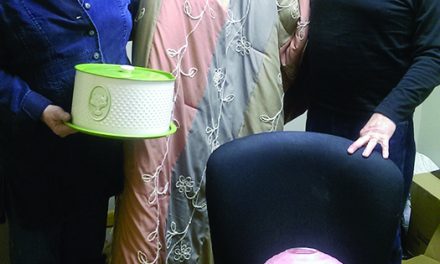 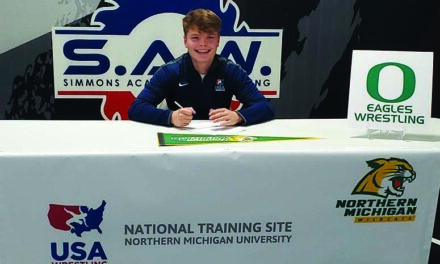