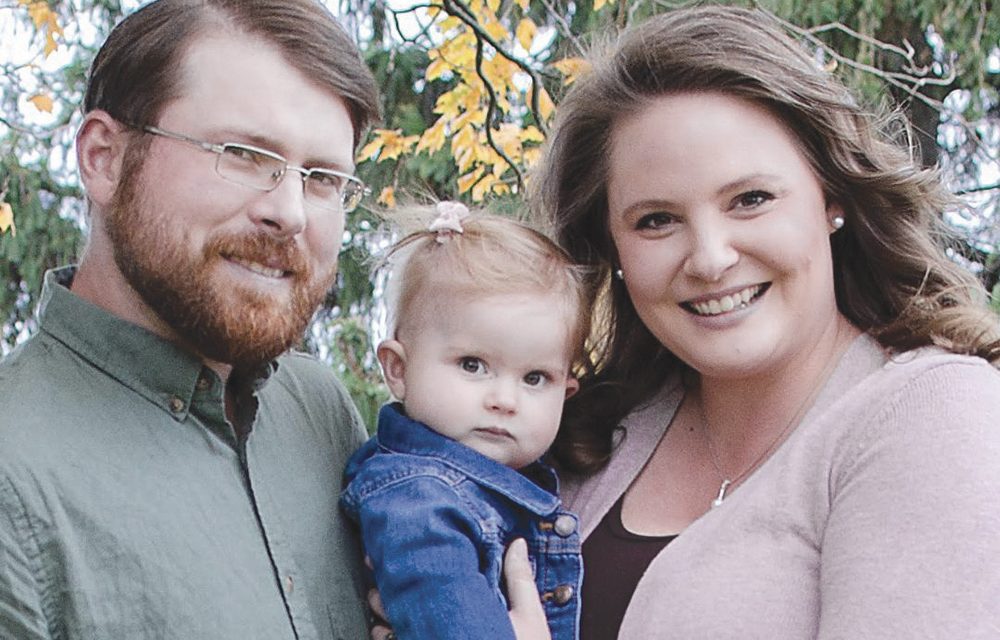 Some of the required skills for this job are to be a business man, accountant, agronomist, mechanic, laborer, veterinarian and weatherman. This is just a short list of qualifications needed to manage the multiple calamities a person can encounter performing the occupation of our American farmer.

However, in this case, you can throw in husband, father (and all that goes with it) and number-one supporter of the real boss, his wife.

Let me introduce you to Evan and Grace (Parker) Boehmer and their beautiful daughter Belle. They are the owners of Single Tree Farms. Evan and Grace are lifelong residents of the Charlotte area. Both went to and graduated from schools in the area.

Evan went to college at both KCC and LCC although, as Evan admits, not with a lot of enthusiasm for the secondary portion of education. He explained to me, for him, secondary education and farming were not always compatible. At times, they seemed to be counterproductive and in competition for his time and energies. But he did manage to make it through the process.

Farming is an all day, every day, occupation. It is not for the doubters or those lacking confidence. There are not many moments which Grace or Evan are in search of something to do. With the cattle, the 300-plus acres of ranching and their one-year-old daughter Belle, there is always something happening someplace.

Evan is a fifth-generation farmer, so he came to this with eyes wide open. He could never see himself doing anything else. He lives in the only home he has ever known — a farmhouse only a half a mile from where we were sitting. The land we were overlooking is the same land he has always known.

The farm itself, Single Tree Farm, has its own history. The previous owner named it as such and raised cattle, with some of them becoming very noteworthy in the circle of cattlemen. Evan picked up the challenge in 2009 and became owner of the farm. The two of them established the herd of cattle you see today.

In the beginning, they started small with only a few head of Angus cattle. The limited stock was bred with quality bulls, growing the herd with constant and selective culling; choosing only the best of what they had in the field. Those which did not meet his, and later Grace’s, expectations were sold off in one form or another. Evan is unabashedly proud of just how perceptive a judge of cattle Grace is; better than him many times. Grace, who sat with Belle on her lap, smiled with eloquent agreement.

Their herd has grown to over 100. Evan believes this is probably one of the larger herds in this area and includes a few award-winning bulls. Due to their success, Certified Angus Beef selected Single Tree Farm to paint CAB’s trademark logo on their barn facing Old Hwy 27 as part of their anniversary brand barn campaign; one of only 40 farms to be chosen for this honor.

Of course cattle eat. They eat a lot. You cannot raise these numbers of cattle, buy the feed and be successful. The only alternative is to grow your own feed. Together, they farm over 300 acres of hay, two cuttings a year, and straw. In the beginning, it was just an old pickup truck to handle the up to 700-pound bales. They worked through winter snow and slop and the heat of summer. There were no posh vacations and no time off. This is what was required.

There is so much more. Farming is forever fixing equipment, becoming a vet 80 percent of the time and birthing cattle in the middle of the night, usually in the cold of February, all while keeping your mental balance. The two of them have each other. From their success, this seems to be enough.

I greatly appreciate farmers. Evan and Grace are just great examples of these amazing people, farmers, here and across the country. They are incredible people. If possible, sit and listen to a farmer’s life when they can give you the time. It’s truly an experience of life. The Boehmers exemplify that experience.

Douglas M. Hoy is a regular contributor to this newspaper.