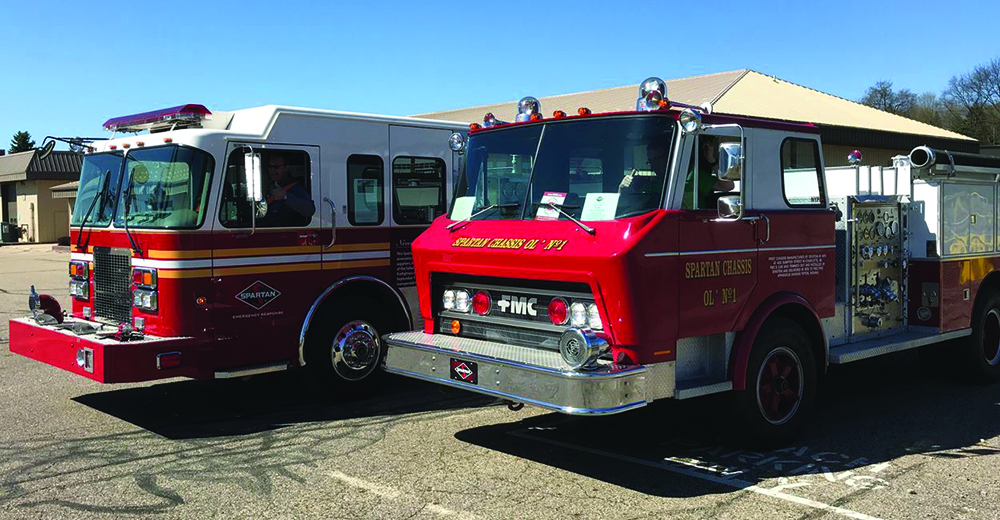 — Tradition runs deep in the firetruck industry, and Charlotte has been home to a major contributor to that industry for the past 45 years. Spartan Motors was founded in 1975 by three men who had been left unemployed after the Diamond Reo Truck company in Lansing was forced into bankruptcy. Since then, Spartan has produced a wide variety of special vehicles and trucks for customers all over the world and seen the custom chassis business grow and change immensely over the years.  However, one thing has remained consistent — Spartan employees’ pride in community and building world-class firetrucks.

Earlier this year, the fire truck division of Spartan Motors, known as Spartan Emergency Response, was sold to The REV Group, Inc. and renamed Spartan FIRE LLC. As a result of the acquisition, two of the division’s most-cherished vehicles were recently moved to a new location — the first firetruck ever built by Spartan (known as ‘Old No. 1”) and the 2001 911 Memorial Fire Truck.

Zac Soderberg, who has worked at Spartan for over 25 years, said the two vehicles mean a lot to the company and its employees. He and fellow long-time Spartan associate Mark Bartlett moved the two trucks to a local storage facility for safe keeping on May 2 and garnered quite a bit of attention as they drove through town. Bright red and shiny trucks are hard to miss.

“It was an impromptu event,” Soderberg said. “But a lot of people noticed us as we made our way through town, kids’ eyes lit up, and we honked the trucks’ air horns in response, which always makes for even bigger smiles and waves.”

He explained both vehicles are considered “historic and precious commodities” to Spartan employees because of their rich meaning and historical sentimental, vocational significance.”

“It was the very first truck we built — took about 16 people,” Foster said. “We were just looking for something to do, being unemployed after Diamond Reo closed.”

Foster worked as a layout designer for Diamond Reo. He also had a close connection to, and understanding of, the fire service, as he served on the Delta Township Fire Department for 27 years. He was raised in Delta Township. In fact, the site of the farmhouse where he was born is now the Lansing Mall.

After Diamond Reo declared bankruptcy, Foster and two others were able to talk another truck manufacturer into giving them a chance at building their own fire trucks. That chance led to what is now Spartan Motors.

“Old No. 1 was hand constructed in our very first location in Charlotte — at 426 Sumpter St.,”  Foster said.

This first Spartan fire truck ended up serving on the front lines of two fire departments, first in Covington, Ohio, and the second in Chester Hill, Penn. Spartan got the truck back in early 1990s and had it restored.

Both Foster and Soderberg explained that, after the September 11 terrorist attacks in New York City, Spartan employees were deeply affected by the impact on New York’s firefighters.

“Spartan came up with the idea to build and donate a truck to the New York Fire Department (NYFD),” Soderberg said. “Our associates donated their time, and we had suppliers and community donors participate and help make it possible.”

“The truck was a symbol of our dedication to the fire service and a way to do our part in the recovery after 911,” Foster added. “The loss of fire service personnel, emergency responders and police officers was devastating.”

“We felt a duty to support New York City,” Foster said. “It was an honor to provide a new piece of critical fire equipment to help New York heal and rebuild.”

He explained the vehicle was not used to fight fires but rather retrofitted and served a ceremonial purpose as a ‘caisson truck.’

“Whenever there was loss of life in the fire service, they would take the body to its final resting place on the truck rather than a hearse,” Foster said. “It was used in over a dozen services in the city of New York.”

Names of fallen officers and emergency personnel are dedicated in a special memorial side mural on the truck today.

However, when Hurricane Sandy ripped through the NYC area in 2012, the lot in which the truck was stored was flooded, and it suffered significant flood damage. The NYFD did not have the funds to repair it, and it was scrapped and sent to a company in New Jersey for auction in 2016.

“When they were scrapping it, they noticed the data plate and thought maybe Spartan would have an interest in it,” Foster said. “And it was Zac (Soderberg) that got the call.

“They made good money on their scrap. We brought it back here and had it restored and brought back to its former glory.”

Soderberg, said the effort was definitely a full team commitment. Restoration efforts were supported and funded by company senior leadership and associates put forth numerous hours in the restoration that was completed a year later, in late 2017.

“It was a special project, and the Spartan leadership truly allowed us what we needed to restore the truck to its present condition,” Soderberg said. “Today, the 911 truck serves many functions in support of the surrounding communities, including attending local parades, memorial services and regional events.

“It’s a consistent reminder of what we do — save lives and build awesome trucks. It is truly an honor to be a part of the industry, vocation and to support the fire service.”

In addition to being seen locally, the 911 truck is also used during the yearly Michigan Firemen’s Memorial Festival in Roscommon.

Foster added that the vehicle has also been made available as a caisson for area service personnel funerals. A well-known member of the Benton Township Fire Department passed away earlier this year, and the truck was used for his funeral.

“It touched the heart of a lot of people to see someone being carried away by the 911 truck,” Foster said. “It is quite a sight and honor to watch knowing the history and symbolism of that truck.”

The two Spartan fire trucks recently “on the move” are shown here. The company’s first truck, “Old No. 1,” is the one on the right.