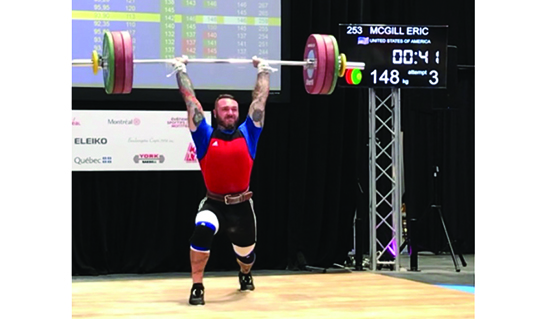 When most see weights and gym equipment, they see sweat and work. Eric McGill, however, sees a challenge. McGill has been weightlifting since the age of 14 and has earned several titles — including five national and one world championship title.

McGill competes in the Olympic style of weightlifting. There are two categories to the lifts – Snatch and the Clean and Jerk.

The objective of Snatch is to lift the weights over the head in one continuous motion. The Clean and Jerk involves two parts – lifting the weights to the shoulder and then jerking them overhead to arm’s length.

Last year, McGill placed fourth at Nationals, fourth at Worlds and second at the Pan-American Championships.

Strength sports have obviously motivated the Charlotte native to stay fit. But the endurance, stamina and perseverance needed in the sport has affected many other aspects of his life. McGill said, in his younger years, he was headed down a tough path in life and strength sports gave him an area to focus on and helped guide his life choices.

“Competing gave me something worth focusing on,” said McGill. “I was making some troublesome, bad decisions and strength training and competing helped me focus and got me out of some situations I didn’t want to be in anymore.”

He credits his father, Duane McGill, for getting him started with weightlifting, and that legacy lives on through Eric and those he mentors. Once he witnessed the positive impact the sport had on his own life, he knew it was worth sharing with others.

McGill has grown his love for the sport from his own weights over the years and now owns CrossFit Fade in Charlotte, inside the Al!ve center of Sparrow Eaton Hospital. He and his wife Morene also own the Big Salad franchise in the facility.

Working with the staff at Al!ve has been a fantastic experience, and that relationship has been a big part of his success, explained McGill.

His professional endeavors into strength training got their start with the CrossFit company. The ability of the instructors to work with people of all abilities and experience has kept him with the company over the years. He realized there were many in the CrossFit world who would benefit and are interested in weightlifting.

For McGill, the guidance of his father, and also his coach Fred Lowe, who coaches him to this day, have proven invaluable. He encourages others to seek out someone to lean on for guidance.

“Even if you’ve never worked out a day in your life, there’s a bunch of stuff I can teach you,” assures McGill. “Reach out and find a professional in your area and take that first step.

Eric McGill lifts in the Clean and Jerk category during the 2019 World Championships in Montreal.