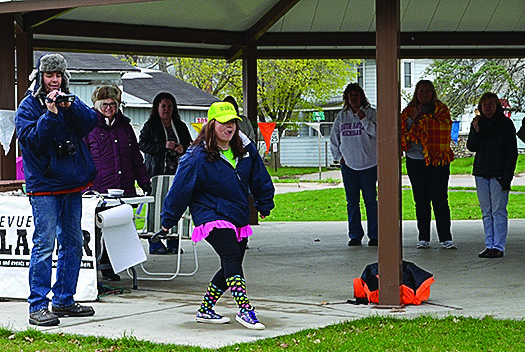 Snow in late April may have affected the number of participants, but it didn’t cool enthusiasm for the fifth annual phone toss competition in Bellevue on Wednesday, April 22. Ten participants took turns tossing varying forms of hand-held communication — everything from cans on a string to cellular phones — in recognition of national Administrative Professionals Day.
The event, founded by The Bellevue Villager owners Aaron and Angie Warner, is in its fifth year of adding some fun and excitement to what Aaron said can be a dull time of year.
“It’s a reason to be silly and support each other,” he said. “It’s a chance to hang out with your friends in the middle of the work day.”
Participants spent their lunch hour competing to see who could accumulate the most distance between three different tosses. The first toss saw competitors throw two cans held together by string. The second throw featured a standard office phone that participants tried to sink in a kiddie pool. The final toss saw competitors try to hit targets with a cell phone.
“We try to change up the events every year,” Aaron said. “It makes the event fun and keeps people coming back.”
The event reached a high point last year when more than 20 competitors joined in the fun. Last year’s event, though as aided by beautiful weather.
“This is the first time we’ve had snow,” Aaron said.
Regardless of the temperature, Mary Otto, owner of JP’s Hair Gallery, returned for her second competition
“Aaron and Angie do a wonderful job trying to get the community together for fun events like this,” Otto said. “They are a couple of great community members.”
The Villager sponsors small prizes for the top three competitors and Boondocks Pizza provides a pizza lunch for all participants.

A look back at downtown Charlotte’s successful summer 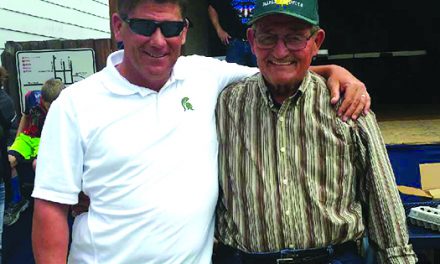 More than sports: Vermontville man creates legacy on and off field