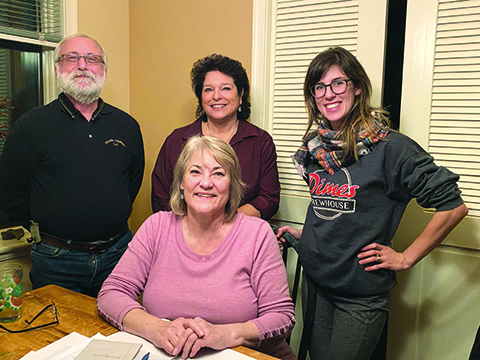 Last month, the Dimondale Business Association (DBA) marked its tenth anniversary of working to promote the many charms of the Dimondale community. But current DBA president, and former village manager, Denise Parisian said she only “accidentally” realized it had been ten years after going through some paperwork as part of the group’s current planning for another year of encouraging others to “Discover Dimondale.”

“I just happened to discover it had been ten years as I was going through some stuff,” Parisian said. “I hadn’t really realized it until then.

“We do have a few thoughts on how we might celebrate our ten-year anniversary but nothing official yet.”

“We exist exclusively to promote Dimondale businesses and the community,” Parisian said. “We are a ‘grassroots’ organization and our resources can be rather limited, as we are completely volunteer-led and have no paid staff.

“But we do our best for the community we really care about.”

One of Dimondale’s most well-known attractions is it Farmers’ Market, which operates on Thursdays beginning in June. Parisian is actively involved in promoting the market, which has been going strong for 12 years.

Kristy Beck-Bair, DDS, of Family Dental Care of Dimondale said membership in the DBA has been a real plus for her business.

“We’ve been a member of the business association since its inception and have watched it grow and become an integral part of our community,” Beck-Bair said. “Membership has afforded us a great networking opportunity within the greater Dimondale area and allowed us to participate in the many association-sponsored functions over the years.”

Some of those DBA-sponsored events include special promotions for Small Business Saturday in November, the Farmer’s Market Christmas craft show and an annual car show dubbed “Small Town, Big Engines.” The car show is held in partnership with the RE Olds Chapter of the Oldsmobile Club of America and takes place in June, on the Friday before Father’s Day. This year’s show will be June 19.

Beck-Bair said she is proud of the work done by the DBA over the years.

“We are proud to be part of the association’s efforts to expand the businesses’ visibility; market their many talents and product; and promote Dimondale as a walkable, shop-able and vibrant village on the banks of the Grand River,” she said. “I am honored to be surrounded by so many dedicated and dynamic business people in our (DBA) group and look forward to the coming year, as we continue to grow our membership and promote our area.”

The full membership of the Dimondale Business Association meets every other month, with the executive committee meeting on an alternating bi-monthly schedule. More information about the BPA, and the Dimondale community as whole, can be found online at discoverdimondale.com.

The Dimondale Business Association’s executive committee is made up of (back, l. to r.) Randy Chapel of Chapel Company, Kristy Beck-Bair of Family Dental Care, Michelle Rogers of Dimes Brewhouse and (front) Denise Parisian.