New 911 safety system up and running 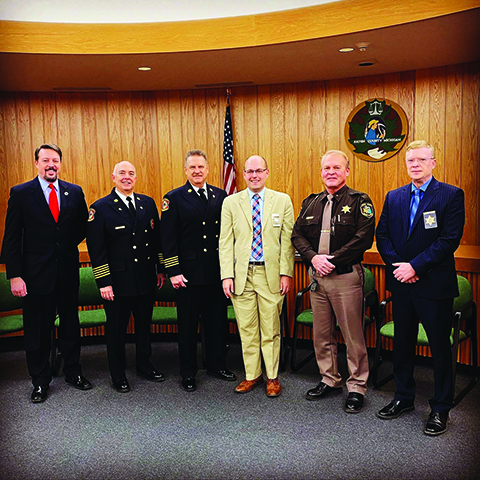 The old system used outdated technology and was at the end of its life, Armitage explained.

“A wind gust in the right direction could blow an antenna or a microwave dish and essentially cripple communication,” he added.

Firefighters sometimes had to carry multiple radios to be able to communicate with other agencies in mutual assistance situations. He explained communication inside buildings was not always reliable.

But those problems will be resolved with the new system. Tests on the new system have shown a vast improvement over the old system, with 98 percent coverage inside buildings in the 1,400 sites tested.

The $13.1 million project provides for five new towers; 957 new radios for police, fire and EMS; and 464 pagers for fire services. There are 39 new outdoor warning sirens in the system, and these will automatically activate based on National Weather Service warnings.

“With the new system, when dispatch is notified of a tornado, for instance, all the sirens throughout the county can be activated by 911 operators immediately,” Rogers said. “It also provides firefighters with much-improved communications while in structure fires.

“I’m very proud of Eaton County for being the first in the tri-county area with the new and improved radio system to protect firefighters, first responders and citizens.”

Delta Township Fire Chief Gregg Ginebaugh pointed out that the new radios issued to the fire departments have larger knobs on them, making them easier to use with gloved hands and in a dark environment. He also noted that they will be using one system and one radio now, which increases the interoperability between neighbors in mutual assistance events.

“This will be a huge leap forward for us,” Ginebaugh said.

“This will improve radio coverage and will help satisfy our mission to provide the very best in public safety and services to the people of Eaton County, including the safety of our first responders, firefighters and law enforcement,” Reich said. He also thanked Armitage for his work in getting the system up and running.

In 2019, Eaton County Dispatch received over 141,000 phone calls and dispatched to over 92,00 incidents involving police, fire and EMS.