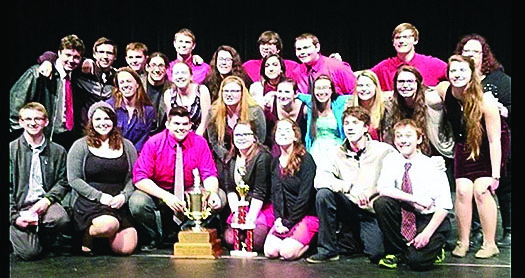 The frigid, late evening air was stirred as a lone school bus drew up to the doors of Olivet High School. The quiet was instantly broken by the laughter and elated voices of 25 members of the Olivet Theatre as they emerged carrying a large golden trophy marking their MIFA Division III State Championship win.
They commented to each other in excitement as they recalled the announcement of their school as the Division III State Champions only a few hours earlier. Thirteen schools, from Class A, B, and CD classifications, rose to their feet as these students accepted the award they so richly deserved. The students held the trophy with pride as lights from cameras flickered to mark this moment forever.
OHS Champions Maggie Dunn, Matthew Dunn, Lizzy Embree, Calvin Etson, Haley Glenn, Bri Pliley, Seth Harrington, Hunter Hayes, Iris Ivorra, Jaysen Kiplinger, James Leppien, Lexy Maas, Corey Meyer, Drew Meyer, Zach Mills,  Shawna Morton, Amanda Peterson, Kasey Porter, Sam Ryan, Elizabeth Schriner, Dakota Shank, Madelyn Smith, Sierra Thurmond, Dominick Vest, Brandon Wade, Gabe Weeks, should be so proud of this accomplishment.
This unforgettable journey began mid-December as the theatre team commenced with rehearsals for their latest entry into the Michigan Interscholastic Forensics Association Theatre Competition. It would be their 16th year with this competition, and many were excited to begin.  The play selected was a challenge as it was a musical, something the students of this particular group had never taken into the competition arena. MIFA offers a statewide competition annually to showcase the talents of theatre students from all school classifications. Beginning with a District level at numerous locations around the state, three adjudicators decide, based upon an extended criterion, which schools will progress to the Regional level. The qualifying schools then perform on the Regional level, again judged by three new adjudicators.
The trip to Chelsea was truly an honored one, as they became one of the 13 qualifiers from around the state. They wish to thank their parents and community for their generous support. The Olivet students were able to view many productions from schools across the state, ranging in variations within the comedy genre. It was exciting to watch them not only learn from the productions they viewed, but to interact with many students from around the state. Building friendships and developing a common appreciation for the world of theatre is the cornerstone of the entire festival. The students were often praised for their talents as well as their openness and kindness throughout the festival.
The weekend ended with an awards ceremony honoring not only the participating schools, but also the achievements of individual performers. The Olivet High School Theatre garnered many of these individual awards. Among the awardees were:  Excellent Acting:  Maggie Dunn, Matthew Dunn, Lexy Maas, Kasey Palmer, Amanda Peterson, and Madelyn Smith; Excellent Set Design/Execution: Lizzy Embree, Seth Harrington, Hunter Hayes, and Corey Meyer; Superior Acting:  Lexy Maas, Kasey Palmer, and Dakota Shank; Superior Concept Book:  Lizzy Embree; Superior Lobby Display:  Lizzy Embree, Hunter Hayes, and Corey Meyer. 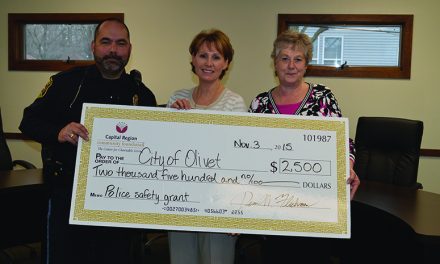 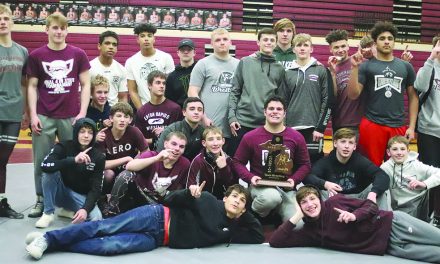 March is reading month, are you stretching your mind?