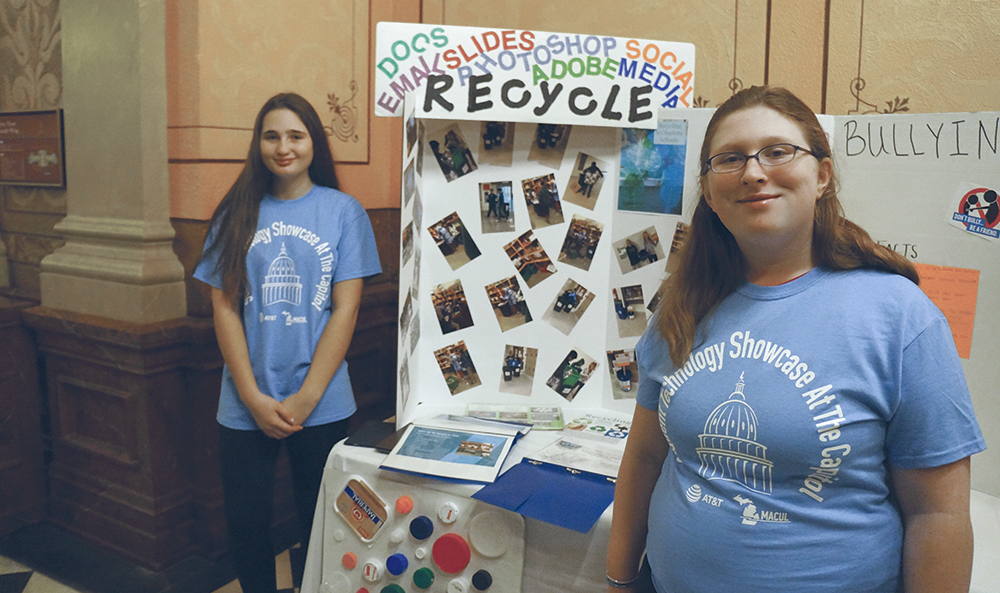 — Students have been learning value job skills by getting real-world job experience as part of an on-going recycling program at Charlotte High School (CHS). Four years ago, teachers Tami Wilson and Ryan Guimont started looking into ways to give their students, all special education students, some meaningful job experiences.

“Part of our students’ curriculum is to learn job skills,” Wilson said. “We were trying to give them actual experiences rather than just talking about it in class.

“When Ryan (Guimont) moved to the high school, we started looking for hands on job skills we could do. And we ended up doing custodial, landscaping and recycling that same year.”

Guimont had moved to the high school from another school, where he had a run a program similar to the current recycling efforts.

“It was a great way for our students to work on independent job skills while also helping the school building,” Guimont said. “There was no recycling program there at that time.”

Wilson said it is an “awesome” experience for the kids because it provides real job skills and is student-led.

Since the start of their working with the Charlotte Area Recycling Authority (CARA) four years ago, the students have been placing bins in each high school classroom. Two days a week they go to each classroom and collect everything. There is a “mini recycling center” in the lower part of the high school, where students sort the donations. From there, material is taken to CARA. They also return any pop or beverage bottles to Meijer, and the money they earn goes back into the program.

This past year, Wilson and Guimont decided to expand what they were doing. Wilson explained that the students had found a place in Indiana able to recycle the caps and lids they had been collecting — a special process that CARA was not able to do. The Indiana facility turns the caps and lids into plastic/ recycled lumber.

“This year, the students decided to collect as many caps and lids as they could to try and build a bench or picnic table for the school courtyard they have been working on landscaping,” Wilson said. “It was a way to combine our job sites into a group project.”

In order to get enough for the bench, the students needed to collect almost 200 pounds of the caps and lids.

“That number seemed overwhelming at first,” Wilson said. “So they decided to see if they could get the community to help.”

The students made collection buckets at each of the elementary schools and CARA to help make it easier for people to donate. They created a poster at CARA that shows what acceptable caps and lids they are looking for. Students also went to second-grade classrooms at Parkview and Washington earlier this school year to talk about the importance of recycling and to ask for help.

“We even had two students who went to the capitol building in Lansing in December to talk about their project to visitors,” Wilson said.

Prior to the schools being closed because of COVID-19, the students had collected 130 pounds of caps and lids.

“The students are looking forward to continuing this next year and maybe getting the 500 pounds for the table instead,” Wilson said. “The students have been debating the table or multiple benches and maybe trying to do a bench at each school for their support.

“The students, Mr. Guimont and I have been very excited with the response and help from the community, and the students are looking forward to continuing this project,” Wilson said.

Earlier this school year, CHS students Abby McCune and Erin Eisner went to the capitol building to talk about recycling.