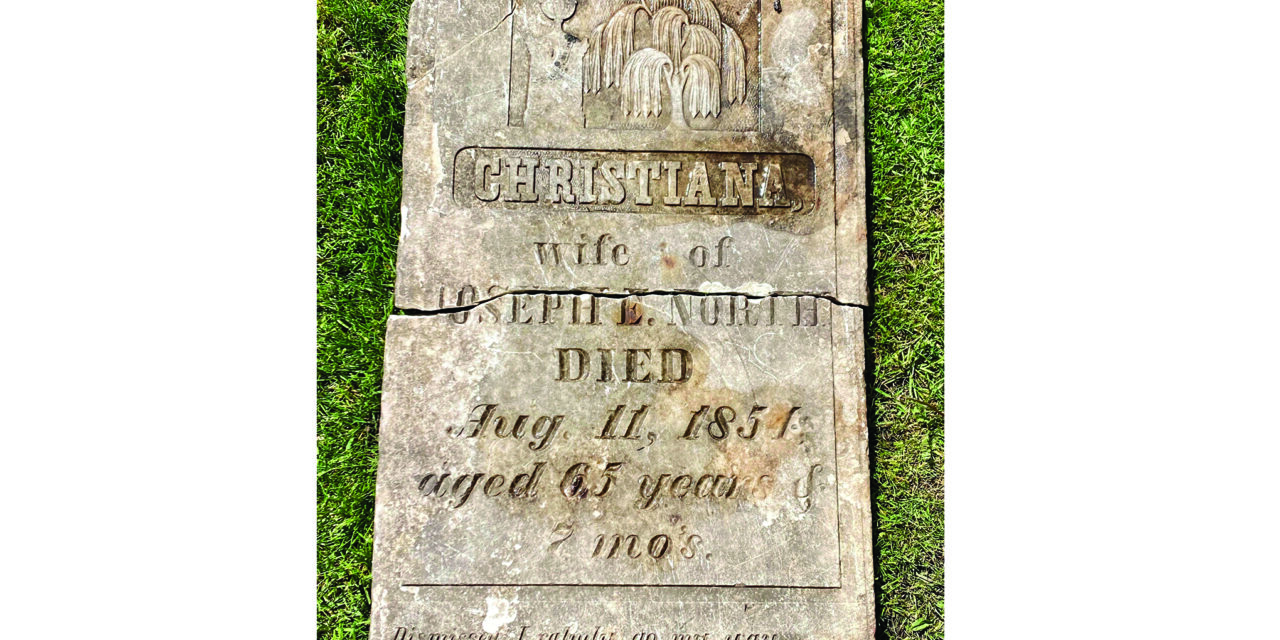 — Imagine the shock of finding a gravestone in your backyard. My first thought would be “If I lift it up, will there be bones underneath?”

This is what happened recently to Levi Polihonki, who lives on Water Street in Eaton Rapids. Last year, he tore down a circa-1925 stone shed on his property. He believes the shed was probably built when the house was. He and his wife have been rehabbing their house for six years, Polihonki explained. This year, while grading the land where the shed had stood, his blade hit stone.

The marble slab was covered by five to ten inches of dirt, Polihonki said.

“I tossed it to the side, thinking it was just another block from the garage, initially. But then the corner of the stone broke, and I saw that it was white, which really caught my eye. I took my hand and brushed the mud off. And I saw the word ‘die.’ I hosed it off with water to see what it really was.”

my way which leads me to

The last line is from an old hymn. At the top of the stone is a willow tree, which is associated with life after death and immortality.

One of the first things Polihonki did was contact his mother about his discovery. She did a quick search online and discovered that Christiana North wasn’t just an average person. Christiana North and her family were some of the early settlers of Lansing, according to “MIGenWeb” — a well-respected genealogy site.

Christiana Teeter (born in 1789) and Joseph E. North (born in 1791), both from Pennsylvania, were married December 18, 1813, in Lansing, New York. They had 12 children. North’s father, Thomas North, had purchased land in the township of Lansing, New York, which had been set aside for soldiers of the Revolutionary War. Joseph North served in the War of 1812 and was taken prisoner on the Canadian frontier. One of their sons, Henry, was later responsible for the naming of the city of Lansing, based on their property in New York. The Norths settled in Lansing, Michigan, in 1839.

My initial concern about bones being buried underneath, as the actual grave of Mrs. North, was shared by Polihonki.

“When I realized what it was, I didn’t want to dig anymore,” he said.

Polihonki works as a site contractor on parking lots and underground utilities.

“I know if you come across a grave it turns into a big thing!”

Many people, back in the early days, were buried right at the family farm, so this was definitely a possibility.

But with a quick search at findagrave.com, I guessed that Mrs. North was not buried on Water Street. She was more than likely buried with the rest of her family in North Cemetery on Miller Road, in Lansing, which was named after her family. How her stone got to Eaton Rapids is the mystery.

I spoke with Shirley Hodges, local genealogy and cemetery expert.

“Sometimes people took them and made sidewalks with them,” she explained. Or possibly this tombstone was replaced for some reason.

I visited North Cemetery to see what was there. The North family members are located in the southwest section of the cemetery, as I was told by Loretta Stanaway of the Friends of the Lansing Cemeteries. One of the North family descendants is also involved in the organization.

The North family wasn’t hard to find, but due to age and weather, the stones were somewhat difficult to read. Most were broken and hard to read. Joseph North’s stone was almost completely erased, but his son Joseph North Jr., was in fairly good shape, having passed in 1851. There was no sign of a grave or marker there for Christiana North, although there was plenty of space for one.

Polihonki plans to return the stone to the North Cemetery to mark the grave of Christiana North and also plans on doing some restoration work on it to attach the two pieces back together.