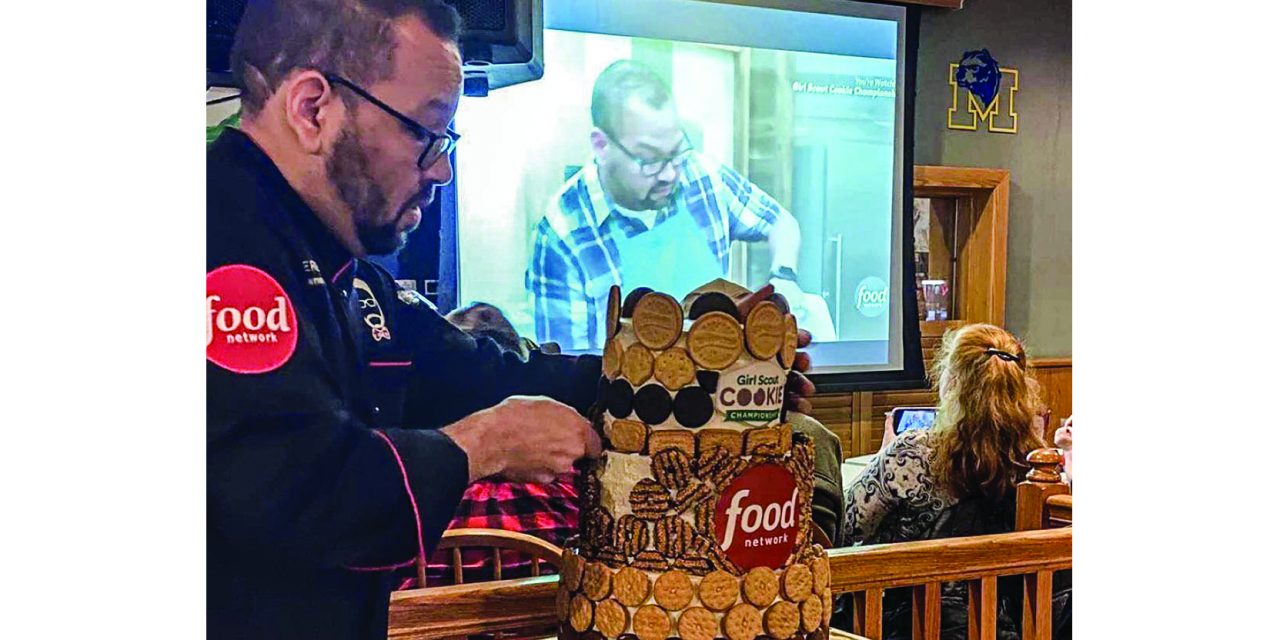 A viewing party — for Davis’ family, friends and community supporters to watch the episode with him — was held that evening at the Eaton Pub and Grille in downtown Charlotte.

All the party attendees, except Davis, got the surprise thrill of hearing the pronouncement of his win together. Only Davis knew he had won, as he was under strict orders to keep that fact a secret since the episode was filmed months ago.

The Food Network show is a dessert competition using the iconic Girl Scout cookie as an ingredient to transform an ordinary cake into something truly of epic appearance and taste. As the first step to bringing home the win, Davis presented the judges with Do-si-dos® (an oatmeal peanut butter cookie) Blondies with a tortilla chip crust and won the first round. He then moved on and secured the bragging rights to the winning cake.

His dark chocolate cake was frosted with a toasted coconut buttercream frosting and then drizzled with caramel sauce. Crushed Samoas® cookies topped the creation. Samoas® are ring-shaped vanilla cookies with caramel and coconut, with a chocolate stripe. With the requirement that the cake must represent an American landmark, Davis chose Michigan’s Mackinac Bridge to top his creation.
“I’m so happy to be able to represent my state and bring home the win,” Davis said.
Davis will receive a dream outdoor vacation and a year’s supply of Girl Scout Cookies, according to the Food Network website.
“Having the recognition of being the Girl Scout Cookie Champion is going to be amazing for not only me but for my family and community as well,” Davis said. “I’m honored that so many people came out to our watch party to support me.

“Charlotte is such a great community, and I’m so proud to be a member of it. I want to thank my family and friends for all their support. I wouldn’t have been able to get to this place without you.”