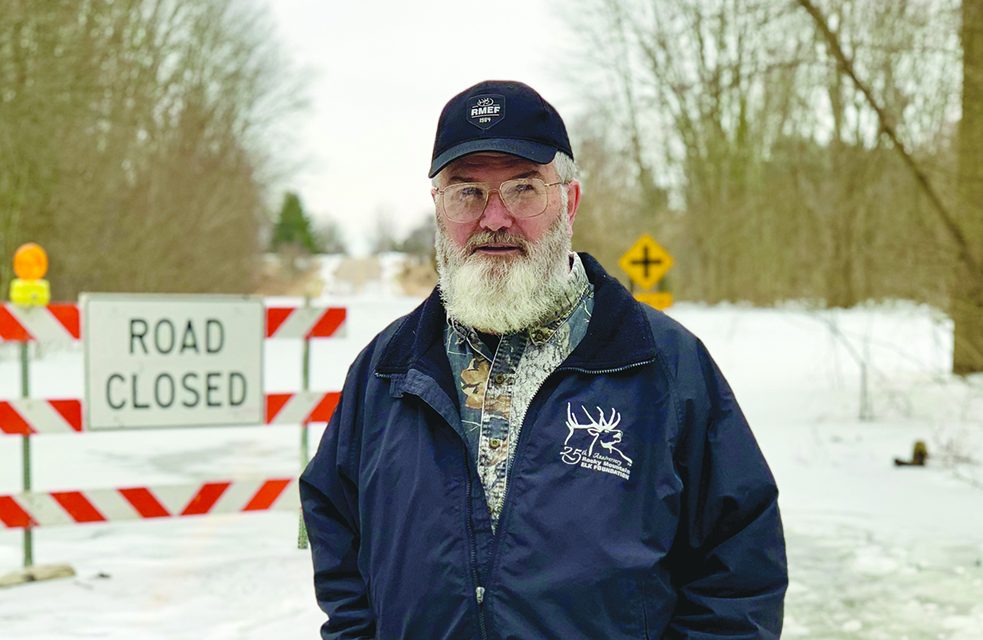 As of this newspaper’s deadline, the corner of Canal Road and Columbia Highway in Eaton Rapids Township was flooded over and closed to traffic until further notice. Rob Sepeter, a homeowner in the area, has been working hard to clear up the red tape and understand the situation that is preventing the resolution of the long-standing flooding problem. Another problem area is a low spot north of Wilbur Highway, Sepeter said. His concern there, he said, is that no one has yet taken ownership of the underlying cause of the flooding, and the road appears to have sunk two feet or more. Sepeter is encouraging other concerned residents and area officials to attend a Thursday, Feb. 6 special meeting at the Eaton Rapids Township Hall regarding these issues.

For more than five years, Sepeter has attended Eaton County Drain Commission meetings, road commission meetings and board of commissioners meetings. He said he has met with numerous individuals trying to resolve the flooding issues and to understand the bureaucratic roadblocks to fixing the problem.

“At each meeting, I raised the issue of the road closures,” Sepeter said. “I have been told by the road commission that it’s a drain commission problem because there is nothing wrong with the road.

“The Eaton County Board of Commissioners told me that they cannot dictate what happens at the road commission because they only have authority to appoint the manager. The drain commission is limited by charter as to how much they can spend on the problem.”

Mike Cronkright lives close to the flooded Columbia/ Canal intersection and said it has been a problem for many, many years.

“My whole life it has flooded over,” Cronkright commented. “Once the drain freezes, the water has nowhere to go.”

Speaking on Jan. 28, Cronkright said a large pump has been running several days to drain some of the water away from the road.

“That pump shows they’re trying, and they worked last fall to the limit of their funding to get the drain open,” Sepeter acknowledged, as one could hear the hum of the motor in the distance. He said he confirmed with the drain commissioner’s office that a contractor was hired to pump water off the road and from around the plugged drain.

Ruthann Clarke, the assessment administrator for the Eaton County drain office, explained that funding was a key issue.

“The drain commission can only spend $5,000 per mile, per year, which then is assessed back to the landowners who live within the drainage district,” Clarke said. “There is no general-fund county money for drains.”

To get the process started, though, a petition must be filed to the drain commissioner, she explained. According to the Eaton County Drain Commissioner website, work is directed by constituent concerns only by petition.

Richard Wagner is Eaton County’s drain commissioner, an elected official responsible for constructing and maintaining public storm drains throughout Eaton County. According to the Eaton County website, the focus of the Eaton County drain commissioner’s office is to “provide adequate drainage and assure protection of downstream properties and existing storm drains, to implement and manage regional flood control measures on public drains and to protect surface waters of the county and state against degradation.”

Sepeter said the issue then becomes a question of taxes.

“So, basically, the petitioners are asking that their taxes get raised to pay for this repair to a county road,” Sepeter said. “Who wants to file that petition?”

“Many voices do the most good,” Sepeter said. “If the residents don’t get involved, nothing is going to change.

“Here is a time and place to learn the facts, laws and ordinances that control responses to this repeated closing of a main north/ south artery in our community.”

Rob Sepeter is shown on Jan. 28 at the flooded area on Canal Road near the intersection of Columbia Highway.