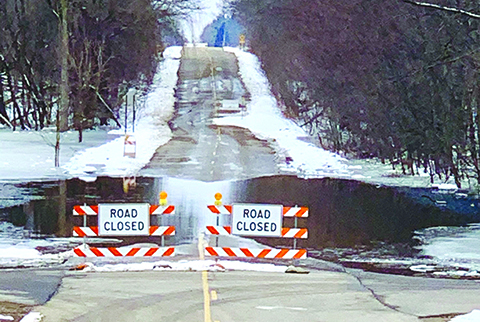 Residents and officials turned out in large numbers for a Feb. 6 meeting held at the Eaton Rapids Township Hall to discuss the ongoing flooding problem at Canal Road and Columbia Highway. In addition to dozens of residents, members of the Eaton County Board of Commissioners, the drain commissioner’s office and the road commissioner’s office were in attendance. Representatives of the engineering firm that handles the county drains, Spicer Group, were also there.
The Drain Code of 1956, through the State of Michigan, limits expenditures to $5,000 per mile per year for maintenance on drains, without a petition, it was explained at a previous meeting. This is money that is collected as taxes from the landholders in the drain district, not money from a special fund. Other improvements require a petition to take action.

Larry Protasiewicz, project manager of the Spicer Group, explained the process required by the drain code in order to start a drainage improvement project. According to Protasiewicz, it’s gotten to the point where a petition needs to be filed. The clay tile used for the drains has blowholes, collapses and requires frequent repair. The official name of the main drain in question is the Bentley-DePue Drain.
“The tile was never big enough,” Protasiewicz said. “But on repair we can’t change the size, due to the restraints from the drain code.”

To start the process, the following steps must be taken:
First, a petition is filed with the drain commissioner. It can be filed by five property owners, the municipality, the county, the road commission or the Michigan Department of Transportation.

The drain commissioner then appoints a Board of Determination — made up of three property owners who own property in the county but not in the drainage district. A public hearing is held to determine whether the drain or maintenance and improvement of the drain is necessary for the public health, safety or welfare. If the board determines necessity, a property owner has 10 days to challenge the determination in circuit court, and the township has 20 days after notification of the determination of necessity to appeal the decision in probate court.

The drain commissioner would determine the scope of the project, at which point the project is engineered and plans and specifications are prepared. Bids are requested, and notice is given to those in the district.
Michael Cronkright, who owns property at the corner of Canal and Columbia, expressed concerns over this procedure.

“There isn’t even a rough estimate yet for the cost,” Cronkright said. “If five property owners sign a petition, they are giving a blank check to the government without knowing the costs we are facing.
“The benefit is for the people down the road, not for the people getting their land flooded.”

Area resident Janice Heck said only a relatively few people would have to foot the bill for something that helps many more.
“Twenty-five hundred cars a day pass down Canal, on the shoulders of 200 people,” Heck said. “How is that fair?
“It is literally a seasonal road. We are being assessed as a primary road but not receiving the services.”
Patrick Murphy was another concerned citizen who spoke out at the meeting.
“We are obviously dealing with an antiquated system,” Murphy said.

Murphy went on to suggest that a survey be done to determine the water flow in the area and determine where the water is coming from.
Eaton County drain commissioner Richard Wagner said he has sought state funding sources to no avail and that he can shut the process down if it proves to be too expensive.
No decision has yet been made on the issue. Pumps were placed at the intersection and excavation was done to provide some relief from the flooding. This was done using $23,000 in emergency funding, according to representatives from the drain office.

Eaton Rapids Township Supervisor Scott Wilson said the township board will need to determine what is best for township constituents.

“We need to come up with a plan that will work for all,” Wilson said.
A special meeting, and vote on the drainage issue, has been scheduled for Tuesday, Feb. 18 at 7 p.m. at the township hall. The hall is located at 2512 S. Canal Road.