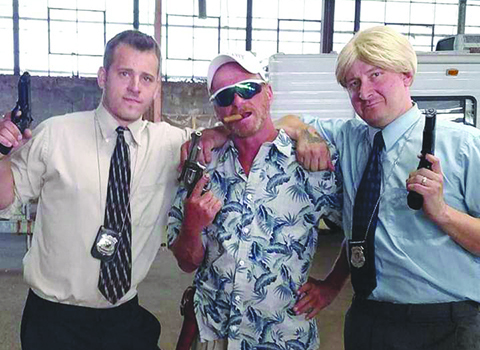 Expect cops if you decide to head over to the Eaton Theatre in Charlotte next weekend. And expect to laugh.

An independent film titled “It’s a Cop Thing” — co-starring Charlotte resident Timm Williams — will be showing at the movie theater in downtown Charlotte Friday, Feb. 14 through Sunday, Feb. 16. Billed as a “slap stick comedy,” the movie was produced and filmed in Cheboygan, Mich., and had its premier there in mid-January.

“It’s a goofy comedy, kind of along the lines of ‘Airplane,’ said Eaton Theatre owner Leann Owen. “The runtime is 88 minutes, and it is rated PG-13, for a little bit of swearing.”

Owen said she was recently contacted by Williams, who lives and works in Charlotte, about showing the film.

“Timm (Williams) knows a lot of people from around here, as he grew up in this area, so I consider him ‘one of our own,’” Owen said. “I think the movie is getting a lot of interest around Michigan, because it is filmed here.

“I grew up in Michigan, and when I heard he wanted to bring it here, I thought it was a really neat idea.”

“It’s a Cop Thing” is written, directed and produced by Michigan native Matt Kwiatkowski, who also happens to be a good friend of Williams. The two met back in 2014, when they both appeared in a dinner theater production in Mackinaw City.

“Matt called me up and said ‘We gotta meet, as I’ve got the perfect part for you,’” Williams said.

The part was that of Cheboygan Police Chief Rex Redoutey — named in honor of Williams’ real “Pop” who was like a father figure to him. He explained the aspects of the role that were perfect for him were to have a beard, long hair and a “gut.”

“(Matt) said I was the only one he knew who could pull off the beard and the long hair,” Williams said. “I had to grow the beard, and I hated every minute of it.

“I also had to grow the gut, but the whole thing was actually quite fun. And the wardrobe was also perfect for me, because I got to change into something different for virtually every scene.”

He added that being “on stage,” with lots of costume changes, is something he has long adored.

“My tenth-grade English teacher, Alyce Mott, is the one that got me interested in musicals and plays back in high school,” he said.

Now in his 50s, Williams still loves being an entertainer. And he did more than just act in “It’s a Cop Thing.”

“I was able to run the camera sometimes too and even did some directing and choreographing of falls and that sort of thing. You gotta remember, it’s slapstick comedy, so we had a lot of fun.”

The plot of the movie is pretty straightforward. A drug cartel, led by three female mob bosses, has moved into Cheboygan. Williams’s character (as police chief) — along with his two detectives, played by Kwiatkowski and Mike Root — have to try to outsmart them and keep them from corrupting Cheboygan any more than they already have. The movie was filmed entirely in the Cheboygan area, with the bulk of the film taking place inside a large warehouse. Filming took place over the course of two and a half years, and Williams said it features “a lot” of extras, also all from the Cheboygan area.

“It really is a barrel of laughs,” Williams said. “It starts off funny and just gets funnier.”

Tickets are regularly priced and can be purchased at the box office at any time. For more information, see the Eaton Theatre Facebook page.

The three “good guys” in “It’s a Cop Thing” are played by (l. to r.) Mike Root, Timm Williams and Matt Kwiatkowski. The independent film, filmed in Cheboygan, Mich., will be showing at Charlotte’s Eaton Theatre Feb. 14-16.