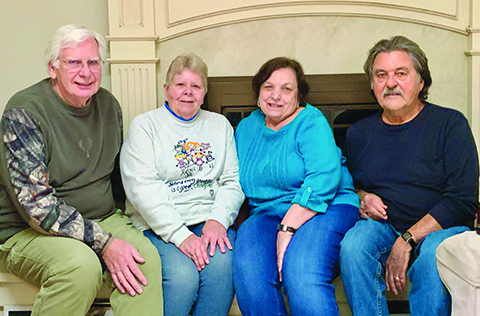 It started in eighth grade on the basketball court and turned into a lifelong, and lifesaving, friendship between Dean Peters, age 75, and Don Wyckoff, age 74. Their lives have been intertwined ever since.

Their wives, Carleen Peters and Carolyn Wyckoff, were also childhood friends. The two couples married within a week of each other. They each had two children and lived near each other. They still belong to the same church.

But perhaps most significant in this close relationship is the fact Dean gave Don one of his kidneys. The two, and their families, recently celebrated the five-year anniversary of this life-changing event.

Wyckoff was originally diagnosed with kidney failure in 1976. His mother had passed away from kidney failure when she was in her 60s, so his health situation was not totally unexpected.  The kidney failure turned around on its own, however, he said, and he went another 38 years with no kidney problems.

In 2013, the problem returned, and Don was again diagnosed to be in kidney failure.

“Usually a kidney-failure patient ends up on dialysis three days a week with five hours on a machine,” Don said. “And feels crummy.”

But with a transplant, he could get another 20 years of life, he explained. His quality of life would be completely different if he were to have a transplant. He was pretty sick at the time, he admitted.

The search soon began for suitable donors. There are over 120,000 people in the United States on the deceased donor wait list, according to kidney.org statistics, with the typical wait for a kidney from a deceased donor being three to ten years.

As soon as they heard about Don’s search, both Dean and Carleen Peters applied to be living kidney donors.

“There was not a moment’s hesitation,” Carleen said. “We were in it together.

“God has given us a very special relationship.”

Carolyn Wyckoff was needed to take care of Don after his surgery and so was not considered for a transplant.

Dean proved to be a match. The transplant was performed on January 23, 2015, which also happened to be Dean’s 70th birthday.

Now, their health report card would be graded an “A.”

“We have the common health issues most others our age might have, but kidney problems are not an issue at all,” Dean said.

“It’s a life-changing experience for the recipient,” Don said. “You look at life in a different way.

“It’s not much of an inconvenience other than all the pills I have to take, about 30 every day.”

After the surgery, Don did have some health issues that, if he had had them before the transplant, would have prevented him from having the surgery. He considers it all a miracle in the timing.

“This is our point,” Dean said. “This was not by chance and was not a coincidence.

“This was God-ordained. God weaved in, and therefore, there was no fear or apprehension. We felt the peace of God.”