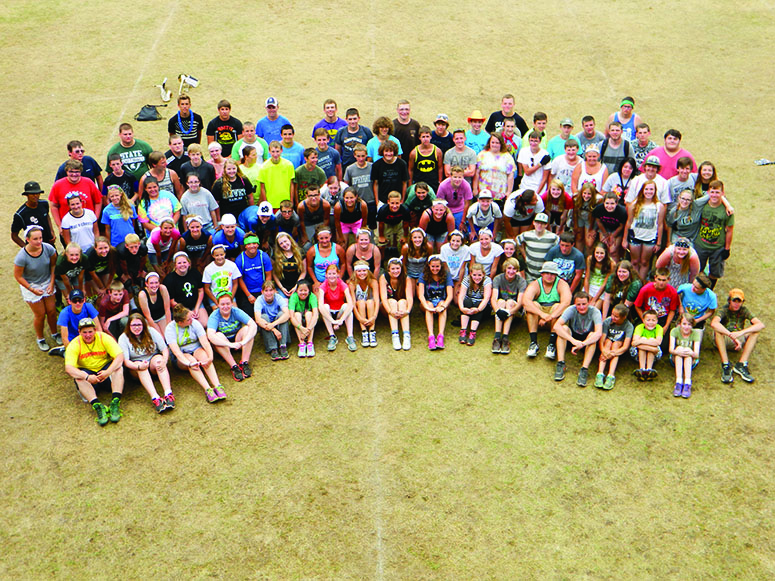 On Sunday, Aug. 2, 115 excited Olivet High School band members loaded the buses and traveled to Camp Greenwood near Gowen, Mich. for their annual marching band camp. With great anticipation, the kids reunited and the marching season began.
Band members rehearsed their marching fundamentals, music and routines throughout the week for nearly nine hours a day. Their marching drill includes many difficult maneuvers such as producing rotating circles, many floating crescent shapes and backward follow-the-leader diagonals. With feet and knees hurting, band members marched on, learning the 40 different marching sets, which make up this fall’s show.
This year’s marching band theme is, “A Night at the Movies with John Williams.” Band director David Funk began in April arranging and scoring music for the show. He then met with the drill writer and choreographer to develop the marching show concept. Percussion instructor Alex Smith was then brought in to write the percussion parts to help enhance the music.
In June, drum majors Sabastian Lord, Shawna Morton and Jacob Vanator readied themselves for the fall season by attending the Fred J. Miller drum major camp, which was held at Wright State University in Dayton, Ohio. They received training in conducting, leadership and marching fundamentals.
In early July, the award winning color guard began their preparation by participating in Fred J. Miller color guard camp at Northwood University, near Midland. Captains Loren Westlake and Logan Kyre were very excited to have 19 members of the squad attend the three and a half day camp.
Funk would like to thank the Olivet Band Boosters for their outstanding financial support, which made it possible for so many students to attend.
Music that will be performed in this year’s show comes from many different movies, from which Williams wrote the musical score.
Funk commented, “it was very difficult to cut down thousands of hours of amazing music into a seven minute marching program. Hopefully the audience won’t be too disappointed if their favorite music is not performed, but it was impossible to include the music from all of his 80 films.”
To hear the music that survived the cut, the band would like to invite you to see their halftime show this fall.
Band camp would not be complete without the annual Band Olympics. The band is divided into 16 teams, which compete in silly team building games. Many laughs and smiles could be seen throughout the event, which included trivia, a food eating relay and pyramid building contest. On Thursday evening, the band was treated to a pig roast and Skit Night. Students sang, performed and acted out more than 20 hilarious skits.
Funk would also like to thank parents, Gail Rodgers, her husband Anthony, Cathy Kelenski, Terri Morton and Don Porter for the wonderful food they provided all week. Camp nurse Amy Holden, seamstresses Susan Higgins and Susan Stahly, uniform fitters Tami Fleming, Kim Westlake and Shannon Webb, hydration specialist Mike Ivey, and Paul Pawloski, David Martin for the field maintenance and camp directors Brenda Dedafoe and Carol Nelson. The band was assisted on the field by alumni, Levi Armstrong, Renae Morton, Josiah Wolf, Emily Nelson, Ben Nelson, Lexy Payne and Taylor and Trisha Funk.
The band hopes you will be able to make it to one of its many performances this fall. The annual fall band concert is scheduled for Wednesday, Oct. 28 at 7 p.m. in the Olivet Community Schools auditorium.
Article submitted by
Olivet Community Schools. 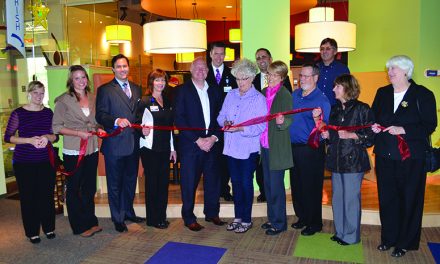 NOURISH by The Big Salad about more than food