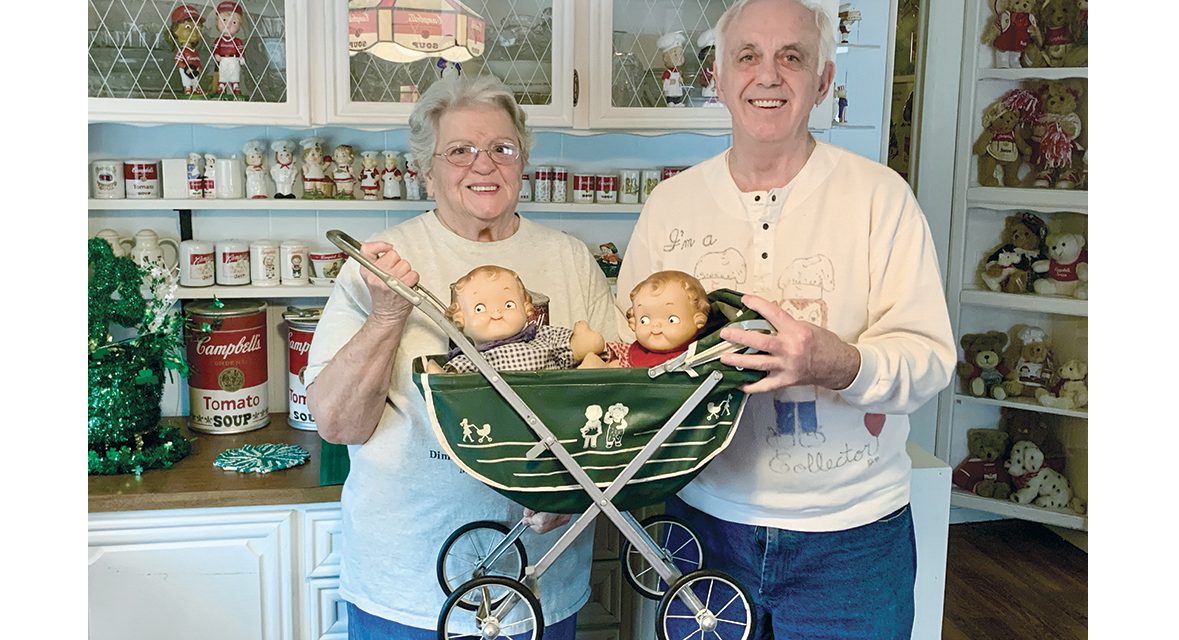 —Dick and Barbara Kline of Dimondale collect Campbell Soup memorabilia and are expected to be featured on an upcoming History Channel show.

The couple estimate they have between 5,000 and 8,000 Campbell Soup items, almost all on display in their home. Some items date from the 1950s and some were manufactured more recently. Their collection is very neatly and professionally displayed on shelves and on their walls, from floor to ceiling.

The Klines are excited that they will soon be appearing on the History Channel’s new show, “Tasting History.” The show features a food expert, Old Smokey, and a collector, Josh Macuga. The two friends are out to discover and eat old and unique foods that have stood the test of time. The first episode is scheduled to air on Wednesday, March 25 at 10 p.m. The Klines are not yet sure when their episode will air but were told it will happen sometime within the next five weeks.

The History Channel crew spent 11 hours taping at the Kline’s home. Of particular interest to the tv crew was a small can of dehydrated potato soup from 1962. It was opened, prepared and eaten as part of the show. It opened with a vacuum-packed “whoosh” and tasted fine, Kline said. The Klines have an entire collection of small cans of soup that would have been in factory lunchrooms and diners.

They were also interviewed on Antiques Roadshow in the past about their collection, but the video was lost and never shown.

“Honey, we’re in trouble,” Dick said when they recently walked into a Lansing store and saw multiple Campbell Soup mugs for sale. They currently owned over 300 Campbell’s Soup mugs and added a few more to their collection that day.

The passion for Campbells started when Dick bought a Christmas ornament in 1980, and the collecting has grown from there.
“It makes me feel good he has an interest,” Barbara Kline said. She also pointed out that he is her favorite part of the collection. She also takes great interest in her husband’s hobby and started a Campbell Soup collector’s newsletter. It was a printed newsletter, and she had 250 subscribers at one point.

A green and white doll buggy from 1955 is Dick’s favorite piece in his collection.

“There are only three or four of these still in existence,” he explained. He has placed two Campbell Soup Kids dolls in the buggy.

Barbara pointed out a musical-go-round that plays the Campbell’s “Mmm, Mmm, Good!” song as her favorite piece in the collection.