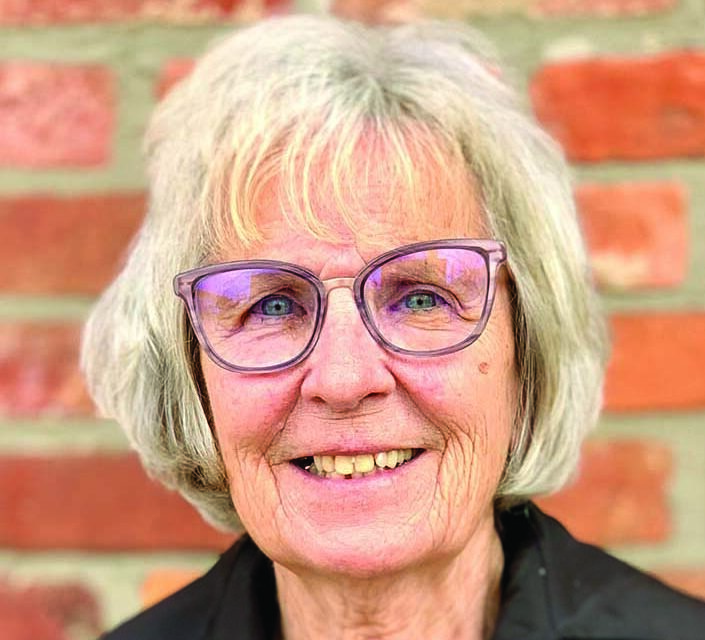 Rita Honeysett, director of the Jean Bradford Kline Senior Center in Eaton Rapids, is someone who sees a problem and steps up to help resolve it. Years ago, she realized that senior citizens were lacking advocates, someone to make sure that they had help and to make sure they understood their options as they aged. She decided to help fix that situation, and at age 60, returned to college.
“I wanted to make a difference,” she said.
Maybe being the fourth of twelve children in her family was the catalyst in her thinking about the world and older people. Having a list of assigned duties in this large family, and caring for her younger siblings at an early age, helped her realize that there’s always someone who needs help, especially those who are dependent on others.
She grew up in Plainwell, Michigan. “It’s also known as the ‘Island City,’ just like Eaton Rapids,” she explained. Plainwell is very similar in population to Eaton Rapids and is a typical small town, with the Kalamazoo River running through the center of the city. She left Plainwell when she was 19, however, her mother still lives in the area. She worked at Wyeth Laboratories in Mason and did home health care work for a while, and attended LCC.
Honeysett has two sons, Josh and Paul, and now has two granddaughters and one grandson. They are a very close family, Honeysett stated, and her family is incredibly supportive of all that she does.
As a home health care worker, she saw a pressing need for her clients – someone to advocate for them, to care for them beyond their medical needs, and to support them as they aged.
“Nobody cared,” she said. “No one really paid attention to them and appreciated what they still have to offer, and did not respect their history.”
She decided to return to school and chose Baker College of Jackson as a “non-traditional” student due to her age. The first day of her first class was on her 60th birthday. All her instructors, she noticed, were younger. But her fellow students were great to her, and she counts many of them still on her best friends list.
After her graduation from Baker, she was hired at the Jean Bradford Kline Senior Center in May of 2018, after serving an internship there.
When the pandemic struck, the Jean Bradford Kline Senior Center closed, but Honeysett stayed on in her role as director. Seeking grants is one of her main endeavors while the building is officially closed. Once permission was given from the Health Department, Honeysett started hosting monthly take-out dinners at the center to help generate income.
“We have been so fortunate that nearly all our members have stayed healthy,” Honeysett said. “But the isolation has been really hard.
“There is a basic human need for socialization and interaction,” she said.” it doesn’t go away as we get older.
“If we can provide even just a few hours of respite for someone when they come into the center,” she added,  “that’s wonderful. The interaction with others can be the best medicine to get away from your problems for a few hours.”
In addition to family, Honeysett has also been active in her son’s dog rescue organization. “I’m dying to get another dog,” she said. She has adopted and fostered several dogs. The dog rescue is on hold now, due to the pandemic.