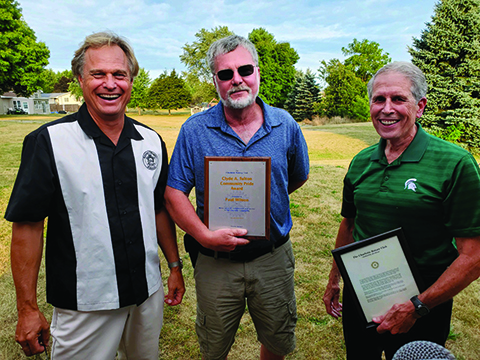 Paul Wilson has been named the recipient of the 2020 Clyde A. Fulton Community Pride Award at the annual Charlotte Rotary President’s BBQ on August 25. This award commemorates and honors Clyde A. Fulton for his life of service and commitment to the Charlotte community and many of its worthy organizations.
Clyde Fulton understand was an exceptional man, always upbeat, positive and optimistic. When greeted with the usual question, “How are you today Clyde?” he would always say, “First Rate!” with an enthusiastic thumbs-up gesture and a friendly smile.
It is humbling to realize how few people will ever measure up to his character, his integrity and his exemplary community service.
The Rotary Community Pride Committee has selected Paul Wilson as recipient for the 2020 Clyde Fulton Award.
Recognizes as a quiet, modest person who is never interested in recognition or awards, Paul Wilson has earned the respect of many fellow citizens for his integrity, work ethic and good judgment. He has the ability to see community issues clearly and form his own lucid opinions unaffected by louder voices, often leading others to seek his private counsel.
“Generosity and service to others are important to Paul, just as they were to Clyde Fulton. He has been known to assist non-profit local organizations on many occasions through donations of time and materials for worthy projects. He will often go out of his way to help others,” stated fellow Rotarian Dr. Fred Darin.
“One example I remember was a few years ago. Paul drove up north to the aid of very close friends in desperate need of help after a major storm. The man was unable to leave his home because multiple large fallen trees blocked his home’s only access road, and there were no neighbors or family he could call for help. Paul dropped everything and spent three days with his chain saw clearing the trees and opening up his friend’s road. That is the Rotary ‘service above self’ we see from Paul Wilson,” continued Darin.
Community service credits include a term on the Charlotte Chamber of Commerce Board of Directors, membership in Charlotte Rising since inception, and he served on the Downtown Development Authority, appointed in 2017, including Chairperson for three years. Paul joined Rotary in 1990, serving as President in 2007-2008 and was Treasurer of the Rotary Satellite Club for a year.
With the help of Bob Montgomery and many Rotarian work crews he spent hundreds of hours over the past 15 years completing three major Club Projects: (1) Construction of a restroom building at the Rotary Soccer Field next to Parkview Elementary School; (2) Construction of the Rotary Pavilion and restroom building at Dean Park in Charlotte; (3) Construction of the Rotary Pavilion and restroom building at Lincoln Park in Charlotte.
A lifelong resident of Eaton County, working with skilled hands all his life has earned him a reputation for quality and craftsmanship. He began working in home construction in high school, which led him to start his own business as a carpenter and licensed builder. After developing an interest in aviation, he became a pilot and eventually a certified FAA Flight Instructor, which led to his nickname of “Captain”.
Widely known for customer satisfaction and high quality workmanship, his business grew steadily to the point where he needed to expand. So in 2006 he decided to open a new retail store
and showroom in downtown Charlotte — which became Captain’s Cabinetry.
Whenever he gets a break from his busy schedule, he and his wife Karen find their compass pointing them north where they love to spend time at their remote cabin in the U.P. woods.
Submitted by Charlotte Rotary Club