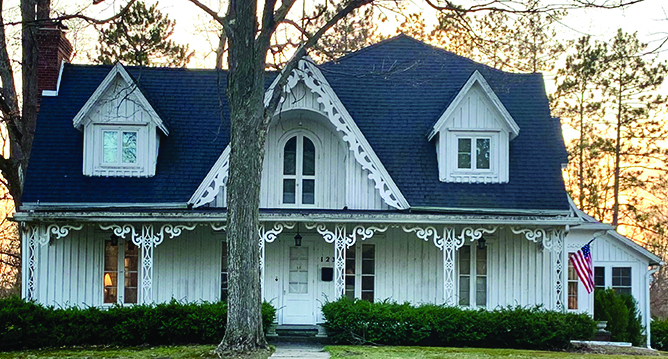 Eaton Rapids has many lovely historic homes throughout the city. One house of special note is located at 123 South East Street, the home of Jan McRee, but known as the “Reynolds” house, after the original owner. The beautiful home is surrounded by towering walnut trees and three acres of land. It is considered one of the finest examples of Gothic Revival architecture in the State of Michigan.
Gothic Revival is an architectural style that can be recognized by the pointed arches over the windows and doors along with steeply pitched roofs and front-facing gables with delicate wooden trim called verge boards. It was a style popular in the Civil War era.
In 1865, Isaac N. Reynolds moved into Eaton Rapids and purchased a large expanse of land. He built a house on the land in 1866. In 1870 he subdivided his original property and platted streets and lots. With the subdivision, he created a new street on his property, which he named after his fourth wife, Diana.
Reynolds was a wealthy merchant in the dry goods business and was a large-scale buyer and shipper of farm produce in Eaton Rapids.  His family, early pioneers in this section of Michigan, arrived in Eaton County in 1836 from New York State and settled in Hamlin Township.
The tax assessment records of 1866 show the value of the property going up from $160 to $1,100 with the house on it.
In 1974, the Reynolds house was submitted to the State of Michigan to be included on the US National Register of Historic Places by the then-owner, Paul Huston. The National Register application describes it with a stone foundation clad with vertical siding. A large wing at the back of the house was probably added early in the twentieth century. The façade has a large gable with highly decorated verge boards, and a veranda runs across the front of the house.
“The Isaac N. Reynolds house was nominated for the National Register of Historic Places because the historical preservation staff of the Michigan History Division of the Department of State and the State Historic Preservation Review Board believed it to be one of the outstanding residences in the state,” the official proclamation said.
It is believed that the interior of the house was remodeled in 1925 and 1945, but much of the original woodwork survived. An ornate white molded plaster fireplace in the living room, art deco in style, is believed to have been installed in the 1925 renovation.
At the street in front of the house is a buggy stop, or carriage block, with the name “Reynolds” on it, used as a step to get up into a carriage without dirtying your skirt.
Reynolds was more than a businessman in Eaton Rapids. Reynolds was instrumental in organizing the local temperance movement and with the 1879 construction of the Red Ribbon Hall. The Red Ribbon Hall was a meeting place for those who agreed to wear a red ribbon on their lapel, signifying that they would abstain from the consumption of alcohol. The influx of people coming to Eaton Rapids for the mineral water had created a problem—they wanted something else to do besides drink and bathe in mineral water, so they visited the bars, along with the locals. The town didn’t like the public drunkenness and bad behavior that resulted.  Reynolds was the president of the Red Ribbon Club for several years and was a member until it dissolved.
Reynolds was elected the president of Eaton Rapids when it was just a village, and in 1892 was elected mayor. He served as a director of Michigan State Bank in Eaton Rapids. He died in 1916 in the house after living there for over 50 years. He left the house to his step-daughter, Orra G. Stirling, the daughter of his fourth wife Diana, and she lived there for many years.
In 1934, Dr. Bert Van Ark purchased the house for $1,500 from Orra Stirling. Dr. Van Ark passed away in 1970. The Paul Huston Family lived there, and then Jan Clark, an art teacher at the Eaton Rapids Public Schools. Clark sold the house to the current owner, Jan McCree, and her late husband, Edward. The McRee family has owned the house since the late 1970s. 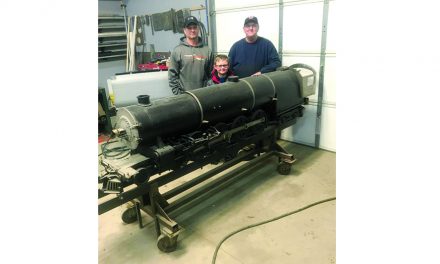 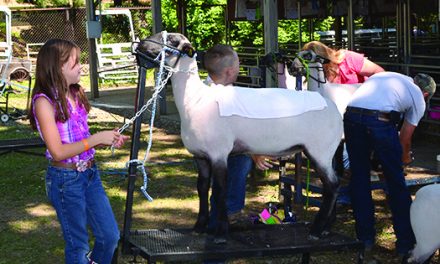